Tiger and Elin to Divorce? 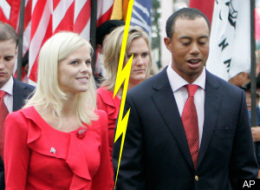 Coming as no surprise to anyone, it appears that Tiger Woods and Elin Nordegren are definitely heading for divorce.  The Huffington Post today reported that a divorce is “100% happening.”

I for one am surprised that this didn’t happen earlier.  It is so difficult for celebrities to stay together because they are always in the public spotlight and highly scrutinized.  The fact that Tiger has admitted to having multiple affairs just puts that much more strain on a marriage.  One isolated incident – I get that.  He is one of the most recognized athletes in the world, travels for weeks at a time, and presumably has women throwing themselves at him everywhere he goes.

But what was the count at last time?  In the teens?  That many indiscretions indicates that there is something else going on.  I hate to say it, but a couple months of therapy isn’t going to change Tiger.

Hopefully this won’t be a long, drawn out process that will hurt their kids.